Woods are amazing. They’re where imagination takes root. Where a love of nature grows and thrives. And they’re the lungs of our county. They are also the best place to escape to, and shrug off your cares. The Japanese have a name for it; Shinrin-Yoku, which, poetically coined, means “forest bathing”. Living in this part of the world, we’re spoilt for choice, so we have teamed up with The Woodland Trust, a charity that exists to protect native woods, trees and their wildlife for the future. They focus on improving woodland biodiversity and increasing peoples understanding and enjoyment of woodland.

Harpsden & Peveril Woods is an 18-hectare area that has been designated as “ancient semi-natural woodland”, an Area of Outstanding Natural Beauty, Site of Special Scientific Interest, Special Area of Conservation and has Tree Preservation Order work. This site, next to Henley Golf Club, approximately a mile south of Henley-on-Thames, and within the Chiltern Hills Area of Outstanding Natural Beauty, has a 50-year management plan with the minimum of silviculture intervention in place.
Harpsden & Peveril Woods is dominated by mature beech, pedunculate oak, ash trees and sessile oak. Also hazel, holly, field maple, rowan, wild cherry all present.

The majority of the land of this wood was acquired by The Woodland Trust in 1991, after the Great Burns Day Storm of 1990. There were a lot of wind-blown trees, and these gaps are being filled with younger trees of a variety of species.

The Woodland Trust says there will be a loss of ash through ash dieback disease, which is very likely to occur in the next 10 years and this will add further gaps to the mature tree canopy. Over time this wood is likely to become more of mixture of beech, oak, birch and sycamore.

The open canopy gaps have allowed other flora and fauna to flourish. There have been 40 recorded species of flowering and uncommon plants strongly associated with old woodland including bird’s nest orchid, narrow-lipped helleborine, green-flowered helleborine, cow-wheat, goldilocks and the yellow bird’s nest. The deadwood habitat is also very rich, and this wood has been noted for its diversity of fungi. In a fungal survey in 1999 recorded 171 species of which nine are rare. 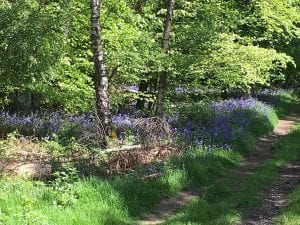 Walk back in time in Penn and Common Woods, once home to Iron Age smelting, a Roman settlement, a wood-turner’s workshop for High Wycombe’s chairmaking businesses, and even an army base during World War II.

You can find this place, which is at the very heart of the Chilterns Area of Outstanding Natural Beauty, close to the amenities in the village of Penn Street, near Beaconsfield in Buckinghamshire.

These woods today have taken their shape as a direct result of its rich and changing history. For those interested in archaeology, there are a number of features to look out for which point to the wood’s past, such as banks, ditches, pits and dells.
As well as providing a home and source of income for individuals, Penn and Common Woods has had an interesting history of wildlife. Wild boar, wolves and deer roamed the wood in the Middle Ages, and there are still roe deer to be seen today.

Medieval farmers would bring their cattle, horse, sheeps and pigs to graze on common ground. The Woodlands Trust has reintroduced cows to Penn Wood to maintain open pasture by trampling down thickets and fertilising the ground, encouraging a vast array of flora and fauna back.

Penn Woods is renowned for its rich stock of ancient woodland. Over much of the site the canopy is dominated by broad-leaved tree species including oak, beech and birch – some of which are over 200 years old. However, there are also areas of dense coniferous plantation and open pasture.

The range of habitats here supports a diversity of species adapted to completely different ecological niches. This can be illustrated by the rare butterflies and unusual beetles. A survey in 2000 discovered 10 nationally scarce beetles.

The Puttenham Village Walk (3miles) Leg 1. Follow the signs for a footpath, you’ll pass a cottage, keep left round the corner, down steps to a bridleway, then turn right (you’ll see yellow arrows, follow them). Pass through some swing gates, over stiles and a flat bridge towards a large metal gate, which, leads you to Puttenham Lane. Turn left, pass through a kissing gate, into the meadow, keep left and follow the winding path steeply uphill. In the distance, you will see Puttenham Priory on the right. At the final stile, continue ahead to a T-Junction in the village. (On the right is St John the Baptist – well worth a visit.) Reward yourself with a pint and lunch.
The Culmill Circuit (7½miles) Leg 2. From the village head towards the North Downs Way. It’s a five-mile straight walk, with a few twists and turns, but you will have a fine view of the Hog’s Back. This path will take you towards Totford Wood to meet a junction with fields. Look out for the yellow arrows, that will guide you through an area called Payn’s Firs. Look out for the little fairy house in the trees. Go right on the road. (If you need a toilet break head towards St Laurence.)

Next the trail is a zig-zag, starting from the left towards Binton Wood. There are lots of chestnut trees here. Stay on the path, following the green-and-white signs, past beautiful, tall pine trees, to a place known as Culver’s Well. The track runs through open woodland of Crooksbury Common, and onwards to the timber works, keep an eye out for the vehicles. You’ll get to a crossing. On the otherside is Britty Wood.

Leg 3 (2½miles). The route goes up through pines, beeches and a coppice. Then it’s downhill into a beautiful area of silver birches. You come to views of Cutmill Pond, this used to serve an iron mill in the 16th century. Pretty soon you’ll pass Rodsall Manor, with its proud stone eagles. When you see the steps on the left, you’ll be back at the car park.

Stratfield Brake, OX5 1UP, two miles outside Kidlington, is really family-friendly. The Woodland Trust began managing the 18.5-hectare site from 1997 after establishing a lease with the site’s owner, Oxfordshire County Council.

The wood is made up of a mature wood, a young wood and a wetland area. This wood contains tree species such as oak, field maple and elm, as well as many bird species such as tree creepers, rooks and woodpeckers. Old oak trees provide habitats not just for birds but also fungi, mosses, insects and bats.
Sadly, at the moment, access is restricted to the mature woodland area in response to the presence of a disease called acute oak decline, which affects native oak trees, leading in some cases to their death. The disease poses no threat to either humans or animals, but it may be spread through movement of bacteria picked up on visitors’ shoes and clothing or by vehicles. Therefore, on the advice of Forest Research, the Woodland Trust has temporarily closed Stratfield Brake’s mature woodland area to the public.

There’s still plenty to observe at Stratfield Brake this summer including the meadows and the wetland. Just park near the sports club and follow the signs to the wood. There are four entrances to the site from here, creating a network of 1.5miles, buggy-friendly surfaced and unsurfaced paths in Stratfield Brake, which are level and have no width restrictions (but can get muddy in wet weather).

One short loop of surfaced path leads to a bird-watching area overlooking the wetland. All year round it attracts all sorts of birds – you might be lucky to hear the drumming of great spotted woodpeckers high in the trees. There’s a good chance you’ll see mute swan, tufted duck, heron and coot and, if you’re lucky you might spot a rarity such as a little egret. This small heron is hard to miss as it has whiter than white plumage.

Stratfield Brake is also a good place to join the Oxford Canal towpath; a 4.7-mile (7.6km) circular walk using the footbridge to Yarnto, developed by local Ramblers for the Canals & Rivers Trust.

Visit www.woodlandtrust.org.uk for more woodland walks. Please remember when setting off for a walk, to take a compass, a good map, a bottle of water and a snack.