October has seen award-winning Oxford interior designer Kerr Drummond swap dreaming spires for scenic sand dunes as one of the co-hosts of Coast vs Country.

This Channel 4 show gives house-hunters the choice of a future in a rural idyll or seaside hotspot. In each episode, house hunters are shown three coastal properties and three countryside properties, as they decide whether their heart lies within the UK’s rolling hills and pretty villages, or in a stunning coastal location packed with seaside culture.

So, how did Kerr come to be involved in the programme? It turns out Coast vs Country is not his first television show. “It was the second television programme I had done,” he says. “I was approached in 2008 to do Kitchen SOS which was produced by a television company owned by Nadia Salwalha. They had sold the concept to UKTV’s Home channel, but one of the conditions was that one of the designers had to be up and coming and new to TV.

“I had just been nominated for Young Designer of the Year, so when they did a Google search they found me quite quickly. After three years in that show, I applied for Coast vs Country and it was either the instant rapport I got with the fellow presenter, Kirsty Duffy, or the fact that they were totally bored of interviewing people. Something must be going right, we are now on out third series!” 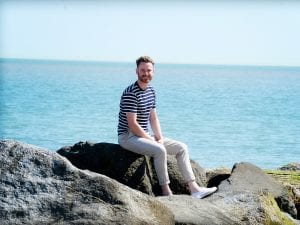 Are the presenters quite competitive… perhaps keeping score as comes across on screen? “Officially nope, but I think I ‘won’ series 1 and 2 against Kirsty. In series 3 the rural idyll is being looked after by Sara Damergi as Kirsty has had a break to have a baby. Fingers crossed I can keep my record up – not that I’m keeping score!”

What made Kerr choose Interior design as a career, considering he is now on television… “It wasn’t my first choice; I was going to go to drama school and my poor drama teacher and given me a lot of help filling in forms etc  – then I chickened out! I was flicking through a local paper looking at various jobs and somebody wanted a junior bathroom designer and I had the entry qualification – an ‘A’ at A-level art. I got on really well at the job and progressed to senior designer after four or five years before starting my own company.”

No doubt the properties on offer come from many centuries; is there a period in history Kerr would have loved to have been an interior designer, perhaps? “I guess being Scottish I would love to go back only a brief time to when Charles Rene Mackintosh was working in Glasgow. But, the other period that interests me is the time of Henry VIII and Elizabeth I when they went on travels all over the country staying with nobles who always tried to outdo the noble before. Though I guess the challenge for the designer was getting paid afterwards as a lot of the nobles overstretched their finances.”

For someone who extols the virtues of the coast, what is it that attracts Kerr to life in Oxford? “I moved down to Oxford with my parents when I was about three, but I really love the place and would not want to move. I live in the Osney area, and this summer could happily go swimming in the river or walk along the bank into the centre of Oxford. Then there are the travel links, I am only an hour by train from the centre of London, but nothing beats sitting outside a pub in Broad Street watching the setting sun glisten off the historic rooves of the colleges.”