Thankfully this was the low point for gin and the spirit has rebuilt its once-tarnished reputation to become the UK’s most popular alcoholic drinks. Gin’s popularity has been helped by upmarket gin bars, ever-growing gin festivals and distilleries offering delicious varied botanical flavours.

If you’re in the mood for boozing like a Victorian, there’s nowhere better than the illustrious Mr Fogg’s Residence club and cocktail bar in Mayfair. Inspired by Jules Verne’s well-travelled protagonist in Around the World in Eighty Days, you’ll find a magical parlour room filled to the rafters with Victorian bric-a-brac. Stuffed reptiles, suspended penny farthings, riding boots, part of a hot air balloon; it’s bizarre yet mesmerising.

Two doormen, dressed somewhere between a dragoon and a Victorian butler, usher guests inside. A resident pianist sings as he plays. From the moment you step off Berkeley Square into this weird world of theatre and madness, Mr Fogg’s utterly engulfs you. Their tipsy afternoon tea is wacky and unexpected. A teapot full of Mr Fogg’s spirited teas is served first; choose from a variety of tea cocktails and tinctures, inspired from all corners of the world. A cake stand laden with fudgy brownies, Portuguese custard tarts and finger sandwiches follows. If you love gin, love cake and love something a bit different, pay Phileas Fogg a visit! 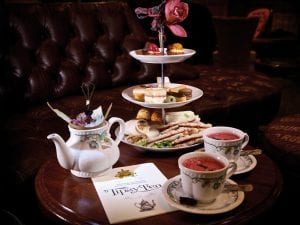 Jon Hulme, co-founder of the London-based Craft Gin Club says: “The rise in gin’s popularity is showing no sign of slowing down and at Craft Gin Club we’re tasting nearly 400 craft gins a year. We aim to reinvent the way gin-lovers discover and enjoy new gins, and so every month we send our members a bottle of craft gin from one of the world’s best distilleries. Each gin is paired with hand-chosen mixers, cocktail ingredients and foodie treats, along with our monthly magazine.”

Gin pioneers and childhood friends Fairfax Hall and Sam Galsworthy are behind Sipsmiths, the star producer based in Chiswick. Their journey began in 2009, in a tiny Hammersmith workshop where they set up London’s first traditional copper distillery since 1820. Their mission was simple: to bring London Dry Gin of uncompromising quality and character, back to the city where it first earned its name. Every bottle of Sipsmith is hand-crafted in small batches.