Watercress season is upon us!

If you are lacking inspiration then I hope these simple but effective recipes from Katie Kingsley will motivate you to acquaint it with your dining table. This mysterious vegetable is known to harbour powers beyond tantalising taste buds. Whether it be a cure for baldness, mental stimulant or aphrodisiac you are after, surely failing to make the most of it this season would be reckless!

Boil eggs for seven or eight minutes (you want them in between soft and hard-boiled), I allow two eggs per sandwich. Peel under cold running water and chop eggs before transferring to a bowl and leaving to cool. Add 2 tbsp of mayonnaise (1 tbsp per egg) then add 1 tsp of curry paste and season with pepper. Mix and leave in the fridge to cool until required. I like to serve in between buttered brown seeded bread with plenty of watercress.

Heat oven to 200°C. Cut three or four Maris Piper or King Edward potatoes in half and then into wedges and place in a large bowl. Cut two fennel bulbs into wedges (reserving fronds) and a lemon into six wedges then add to the bowl. Drizzle over about 2 tbsp of rapeseed oil, season with salt flakes and use your hands to toss everything together and coat it before placing on a baking tray and into the oven for about 40 minutes, or until crisp and golden. You will need to give them a shake halfway through cooking. Sprinkle over the reserved fennel fronds and serve with more flaked sea salt and mayonnaise. 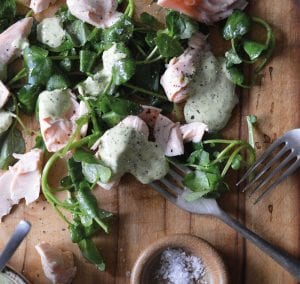 Heat oven to 180°C and line a shallow baking dish with foil. Thickly slice a lemon and fry in a little oil until golden then season and leave to one side. Pat dry using kitchen paper and rub olive oil into as many salmon fillets as people you desire to serve. Season the fish with salt and pepper and lay your lemon slices on top before placing into the oven.

Check the fillets after 10 minutes, they are ready when the fish flakes easily with a fork. Use a food processor to make the mayonnaise. Zest and juice one lemon, add 1 tsp of juice to the bowl with the zest, three egg yolks, 1 tsp of Dijon mustard and blitz until combined. With the motor running, add 150ml of rapeseed oil in a thin steady stream until emulsified. Add 50g roughly chopped watercress and blitz again then add seasoning and more lemon juice to taste. Refrigerate until required.

Dress some fresh watercress and serve on a board for people to help themselves or separate plates then flake the salmon into large chunks and serve over the watercress with dollops of mayonnaise.

Place a handful of pecans in a bowl and toss through enough maple syrup to coat. Transfer to a lined baking tray and toast in a heated oven for a few minutes until they are crisp and glossy. Roughly chop and set aside. Whisk a small 170ml tub of double cream to soft peaks and chill until required.

Make a chocolate sauce by breaking up 100g of good quality dark chocolate into small pieces and placing in a heatproof bowl with 15g of butter. Slowly melt the chocolate, stirring occasionally over barely simmering water (don’t let the water touch the bowl). Remove from the heat when smooth and let it cool to room temperature before stirring in 1 tbsp of golden syrup and 2 tbsp of double cream, or cream to taste.

Gently heat some caramel so it loosens up enough to drizzle. Assemble your splits by slicing bananas lengthways and placing in a dish with two scoops of vanilla ice cream between the slices, a good dollop of whisked cream, scattering of maple pecans, drizzle of caramel and chocolate sauce then finish off with a cherry on top!